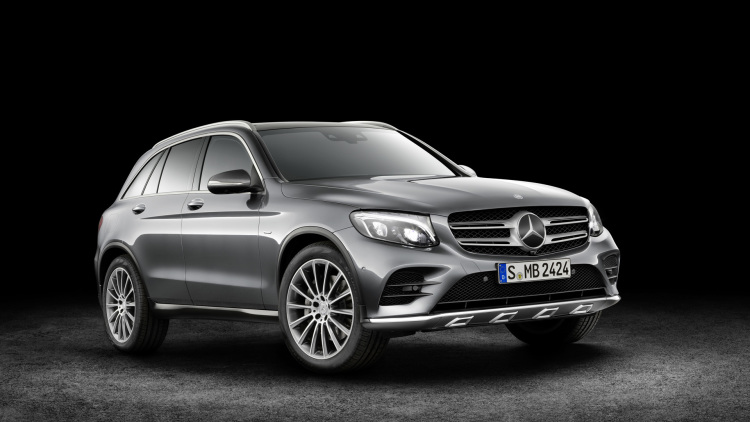 Mercedes-Benz will start selling a plug-in fuel-cell version of its GLC compact crossover starting next year. The German automaker managed shrink the size of its fuel-cell stack by about 30 percent so that fits within “conventional engine compartments.” More importantly for green gearheads, the stack uses 90 percent less platinum. Additionally, the car will include a nine kWh lithium-ion battery pack.

Specs-wise, the Mercedes GLC F-Cell will have a combined range of about 500 kilometers (310 miles), including an all-electric range of about 30 miles and a hydrogen fuel tank that can be refilled in about three minutes. The model’s fuel-cell stack was developed in Vancouver with a Ford joint venture, and Mercedes says that, between its B-Class F-CELL and the Citaro FuelCELL-Hybrid urban, the company has collectively racked up more than 12 million kilometers (7.46 million miles) on fuel-cell power.

Word started surfacing late last year that the Daimler division was working on a hydrogen fuel-cell version of the GLC that was said to run about $76,000, or about 50 percent more than the conventional model. Mercedes-Benz hasn’t yet officially put a price on the plug-in fuel cell model, but you can take a look at Mercedes-Benz’s press release below.

In late 2010, Mercedes-Benz started leasing out its B-Class F-Cell conventional fuel-cell vehicle at a not-so-low rate of $849 a month, though Merc was throwing in free refueling and insurance. That front-wheel-drive model included a 100-kWh electric motor that was said to offer performance similar to a 2.0-liter gas-powered engine as well as a full-tank range of 249 miles. At the time, the company was estimated to have invested about $2.7 billion in fuel-cell technology during the previous 15 years.

Under the microscope: Mercedes-Benz GLC F-CELL: The fuel cell gets a plug

Fuel-cell technology is an integral part of Daimler’s drive system strategy. Because the advantages are clear: a long operating range and short refuelling stops as well as a broad spectrum of possible uses ranging from passenger cars to urban buses. A new vehicle generation based on the Mercedes-Benz GLC is being launched in 2017. The Mercedes-Benz engineers joined forces with partners in the Daimler competence network to develop a new, compact fuel-cell system which for the first time fits into conventional engine compartments. The GLC F-CELL features a large lithium-ion battery as a further innovation of the next-generation fuel-cell vehicles. Rated at around 9 kWh, the battery serves as an additional energy source for the electric motor and can be charged externally by means of plug-in technology for the first time. Together with the further developed intelligent operating strategy, the combination of fuel cell and battery system offers maximum efficiency and comfort. With this set-up, the GLC F-CELL achieves a combined range of around 500 km in the NEDC.

Daimler relies on electric mobility with fuel cell. Vehicles such as the B-Class F-CELL and the Citaro FuelCELL-Hybrid urban bus have together now clocked up in excess of twelve million kilometres, clearly demonstrating that the drive concept is ready for market. The next technology advance is now imminent: working together with partners from its global competence network, Daimler AG has developed an all-new fuel-cell system. Around 30 percent more compact than previously, it can be fully housed in the engine compartment for the first time. The fuel cell developers have also further optimised the performance and operating range. Furthermore, the cost of the innovative technology has been slashed thanks largely to a 90-percent reduction in the amount of platinum used in the stack. From 2017, Daimler will be unveiling the new-generation fuel-cell technology based on the Mercedes-Benz GLC.

World first: plug-in fuel-cell drive goes into production
A lithium-ion battery for autonomous operation is being used in an electric vehicle with fuel cell for the first time. The powerful battery has a capacity of around 9 kWh and is housed at the rear of the SUV to save space. It allows the GLC F-CELL to run on purely battery-electric power for up to 50 km in the NEDC and can be conveniently charged at a standard household socket, a Mercedes-Benz wall box or a public charging station. Two carbon-fibre-encased tanks built into the vehicle floor hold around 4 kg of hydrogen. Thanks to the globally standardised 700-bar tank technology, the tank in the GLC F-CELL can be refilled at a hydrogen filling station within just three minutes, which is about the same amount of time it takes to refuel a car with an internal combustion engine.

The combination of fuel cell and plug-in battery is ideal given the progressive development of the hydrogen filling station infrastructure. The innovative plug-in fuel-cell drive combines the advantages of both zero-emission drive technologies and, thanks to its intelligent operating strategy, continuously optimises the use of both energy sources in line with the current operating situation. The system also features a recuperation function, for example, which allows energy to be recuperated and stored in the battery during braking and coasting phases. In total, the GLC F-CELL achieves a combined range of around 500 km in the NEDC.

Global competence network: access to key technologies
Part of the Daimler AG strategy involves ensuring direct access to key electromobility components. During development and production of the innovative fuel-cell drive, Daimler AG is able to call upon its global competence network. The centrepiece of the technology, the fuel-cell stack, was developed in Vancouver, Canada together with partner Ford in the Automotive Fuel Cell Cooperation (AFCC) joint venture. The stack is produced in the neighbourhood at Mercedes-Benz Fuel Cell (MBFC). Overall responsibility for the complete fuel-cell-drive assembly and the hydrogen storage system is developed from the Daimler subsidiary NuCellSys in Kirchheim/Nabern, Baden-Württemberg.

The Daimler strain plant Untertürkheim is responsible for an establishment for the fuel cell system installation, also at the location Nabern. The hydrogen tank system consisting of carbon-fibre-encased tanks is produced at the Daimler Mannheim plant while the lithium-ion battery comes from Daimler subsidiary Deutsche ACCUMOTIVE located in Kamenz, Saxony. Daimler is currently working systematically to prepare for series production of the Mercedes-Benz GLC F-CELL. The family-friendly SUV suitable for daily use is produced at the Mercedes-Benz Bremen plant, which acts as the competence centre for the model series. The GLC has been rolling off the production line there since July 2015. Regarding to the drive system integration of the GLC F-CELL, the partner EDAG supports the factory Bremen and will settle in the immediate work area.