Industrial OneBlogGeneralThe Energy Observer boat can run for 6 years on nothing but wind, solar, and hydrogen 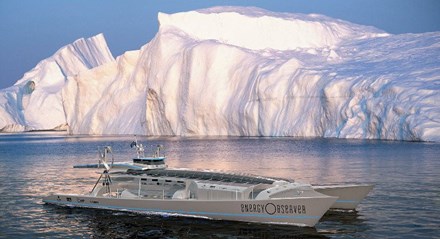 The Energy Observer boat can run for 6 years on nothing but wind, solar, and hydrogen

WHY IT MATTERS TO YOU

Serving as a beacon of sustainable energy, the self-powering Energy Explorer boat will set off on an epic 6-year journey this month.

Nobody could accuse Jérôme Delafosse of not having an adventurous spirit.

A professional diver and documentary maker, Delafosse is one half — with offshore racer and Merchant navy officer Victorien Erussard — of an ambitious duo who are setting off this month on an ambitious six-year quest, aboard one of the world’s most futuristic boats.

More: Like a floating Transformer, this yacht changes shape at the push of a button

“The Energy Observer boat creates energy onboard,” Delafosse told Digital Trends. “It has solar panels, wind turbines, a kite that converts the engines into hydro generators, and a hydrogen fuel system that uses decarbonized sea water.”

The converted, 100-foot multi-hull race boat will sail around the world, serving as a symbol of the power of renewable energy. By combining different sustainable energy sources, the Energy Observer is completely autonomous — while still being able to plot its own course and sail against the wind

In all, the vessel will make exactly 101 stopovers in 50 countries around the globe, ranging from Cuba to Goa — and everywhere in between. The Energy Observer will start by crossing the Mediterranean, before traversing the Atlantic and Pacific oceans.

With a running cost of $4 million per year, it’s not going to be a cheap voyage, but Delafosse is confident the team will be able to able to cover the costs, although they’ve still got capacity for more financial partners.

Once the mission is over, Delafosse said that the Energy Observer boat could be rented out to people looking for a unique sailing opportunity. However, he hopes that the epic voyage will help do something a lot bigger than just advertise the boat itself.

“This isn’t only the first boat of its kind, but also an example of how these sustainable technologies could be used in houses, hotels and other applications on land,” Delafosse said. “Because we’re trying out all of this technologies, it’s like a floating laboratory [for the CEA-Liten research center in France.] We don’t just have the adventure of sailing, but also of testing these technologies in extreme conditions. That’s totally unique.”